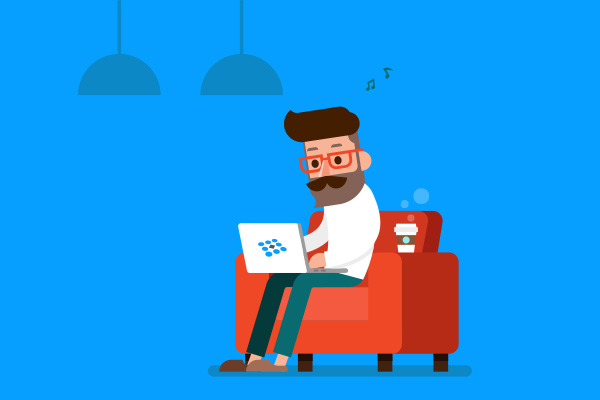 Guide to Remote Debugging and Development

With many businesses moving to remote working due to COVID-19, teams now face the challenge of supporting remote workers. For development teams, that can mean configuring remote system access for remote development and remote debugging.

Setting up remote access to internal workstations and servers in order to allow for remote development and remote debugging can often be a challenge. Security is always a concern but there may also be multiple "hops" involved in order to start from the computer you are sitting at and finally reaching the system you are developing on. TotalView’s remote debugging capabilities are built exactly for these remote access scenarios.

Debug Remotely from Your Local System

TotalView’s Remote User Interface (UI) feature allows you to run the debugger from your local system, such as your laptop, and efficiently, and securely, conduct your debugging session on a remote system or cluster. As depicted below, the TotalView user interface is running on a remote laptop and communicating to the TotalView Debugger “Client” on a remote system. Target applications can be debugged on the “front-end” system or, as in the case of an HPC cluster, TotalView will debug remote processes running across all the compute nodes within the cluster.

The TotalView Remote UI debugging workflow is easy to setup. First, configure the remote system to debug on by clicking on the settings icon for Launch Remote Debugger on the Start Page. 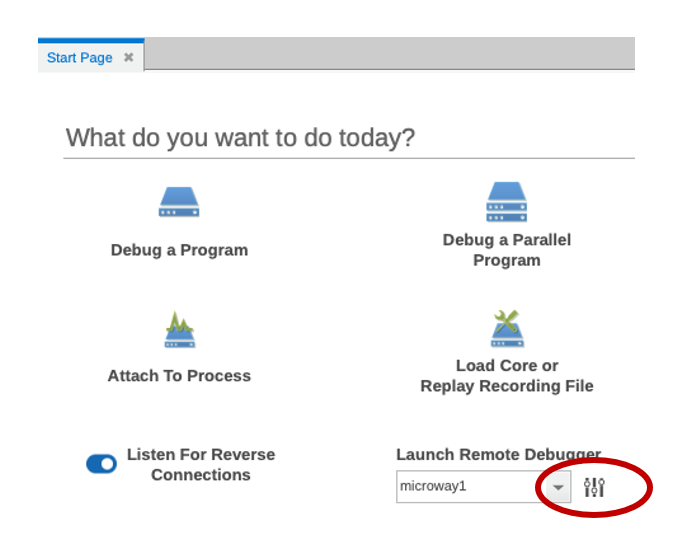 On the Remote Connections preferences page, click create a new configuration to create a new remote host connection. Enter the connection name, hosts to SSH through to get to the final host to run TotalView on, and the installation directory of TotalView on the remote system. 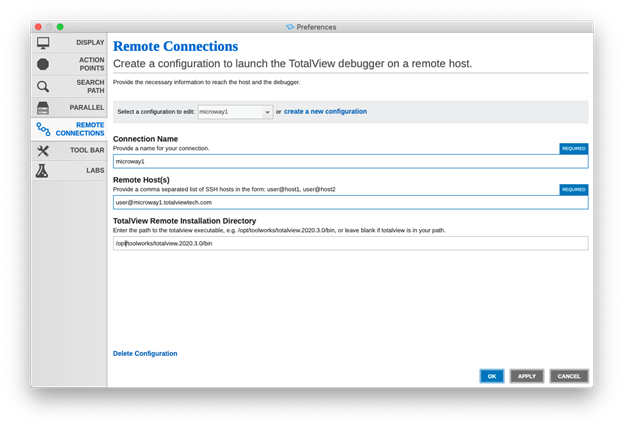 With the configuration set and now back on the Start Page, select the remote connection from the Launch Remote Debugger dropdown. 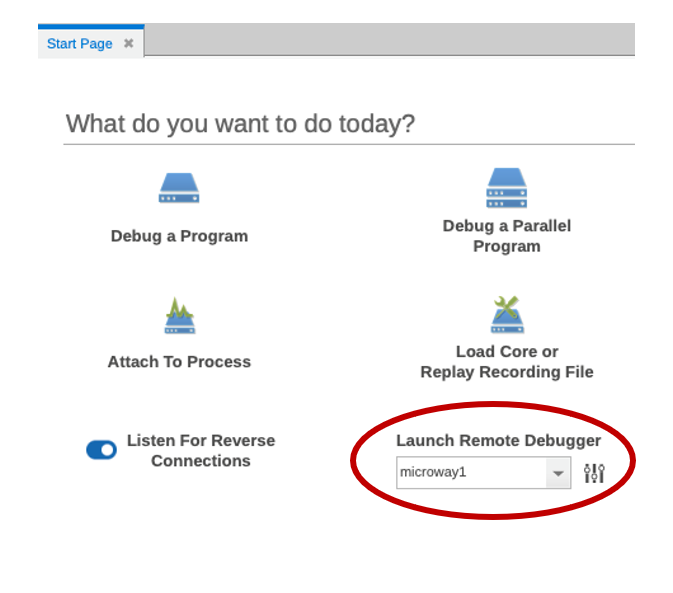 TotalView will then launch a remote debugger on the specified target host. Now, simply use TotalView as you normally would, load a program to debug, set breakpoints, etc., and conduct your debugging!

Sometimes having an entire remote virtual desktop provides additional flexibility needed to conduct a successful debugging session. TotalView's Remote Display Client is a free tool shipped with TotalView that allows developers to easily establish a remote development session by automatically setting up a remote display environment from a remote system, across multiple connecting computers, and to the user's laptop.

The RDC does this through the following three components:

The RDC Client front-end allows you to define the name of the host where development will take place, zero or more "hosts in access order" that define connections that must be established in order to reach the final development host, and how TotalView should be run on the development system. 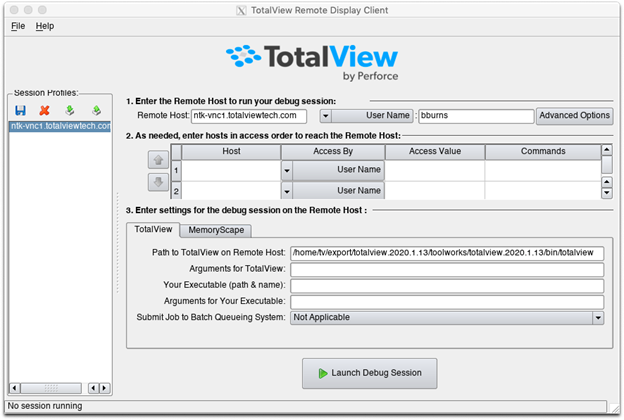 The final remote display architecture setup by the RDC provides for an efficient debugging environment that can be used from home, while traveling, or just to access a cluster running in a remote lab.

Disconnect Starting of the Debug Target from the Debugger UI

In some scenarios it is easier to start the target application to be debugged externally from the debugger and once it runs, then establish the debugging session back to the TotalView user interface.

One common use case for this remote debugging scenario is when a parallel job is launched into a cluster. In this case, a job scheduler will allocate nodes to run the target application on and then run the job. Developers will often have to wait a period of time for the job to launch.

Using TotalView Reverse Connect, a job is launched under the control of TotalView’s tvconnect command. When the job is run a remote debugging connection will be made back to a waiting TotalView user interface. At this point, you can begin debugging your remote application. The following animation highlights the process.

Next Steps and Additional Resources

Looking for additional support on setting up TotalView RDC remote debugging or remote development for you or your team, or have questions about TotalView?

Note: This post was originally published on March 2020 and has been updated for accuracy and comprehensiveness.